My object is an illustration that was created in 1934 and is referred to as “Primeval.” My object portrays both a naked man and woman sitting. The woman has long black hair and has her breast, arms, and the left side of her body exposed to the audience. The woman appears to be angry as her face is screwed. She has both her arms on top of her legs and looks directly at the audience. The man on the other hand, has his face buried in his hands as if he his ashamed or embarrassed of something. The top of his head, arm, back, and legs are the only body features that are shown. What appears to be the purpose of this image is to portray a man and a woman who engaged in illegal sexual intercourse and had to face repercussions for their actions by their society as a result. It appears that the man had engaged in intercourse with the woman who could’ve possibly been a prostitute as she looks directly at her audience with no shame on her face. Also, she does not even bother to cover her body parts. On the contrary, the man visibly shows something is bothering him as his head is buried in his hands and his private parts are covered. He seems to be in distress and almost as if he has put himself into a huge problem.The most striking feature about this object is the contrast of the white and dark features. The only thing that appears black on the woman is her long hair while her whole body is white. However, the man almost blends in with the dark scenery of the image. The man is drawn in all black. This color contrast strikes me because it forces me to understand the differences in the image. The object relates to Ford Maddox Fords novel The Good Soldier which presents the idea that suicide was prevalent amongst those who engaged in adultery and struggled to maintain the emotions that came with living a double life.
Below is the image of my object. 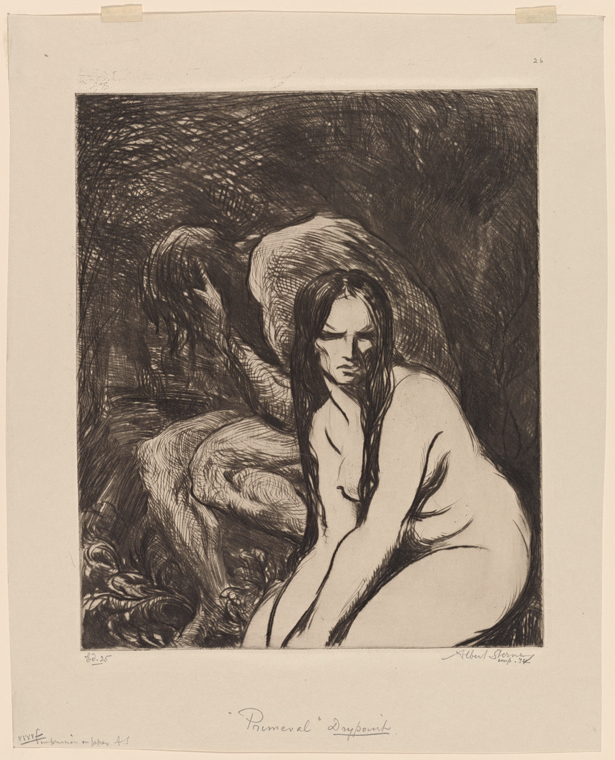 Throughout history and even up until today many partners who discover infidelity choose to remain married. Correspondingly, John Dowell was initially not aware of his wife’s cheating scandal until he was informed about it by Leonora. Ford notes “she stood out that she was not Edward’s mistress until Leonora said that she had seen Edward coming out of her room at an advanced hour of the night” (111). Dowell claims that he was unaware of the affair that went on nine years between Florence and Edward until Leonora told him about it. For as long as Dowell has known Edward he continued to perceive him as an honorable man despite his various affairs with woman and infers that he is not to blame for the affairs. However, Leonora from the start did not hesitate to show that she was aware of her husband’s unfaithfulness. Leonora tells Florence “”you want to tell me that you are Edward’s mistress. You can be. I have no use for him” (110). Leonora indicates that she is conscious of Edward’s unfaithfulness and it does not bother her in the least. The idea that emerges from the object and how Fords portrays the adulterous actions between Florence and Edward is that infidelity was definitely prevalent in the early 1900’s. As the object portrays the woman looking bravely at her audience with no shame evident on her face reminds me of Florence when Leonora clearly tells her that she is aware of her affair with Edward. Knowing that Leonora is aware of her affair with her husband it does not stop Florence from continuing to sleep with Edward. This shows Florence’s shamelessness and immodesty as the naked woman portrayed in the image. The object proves the idea that many individuals engaged in promiscuity and most of the time the faithful partner who discovered the infidelity chose to maintain the union despite how they were wronged. Furthermore, the unfaithful actions by the adulterers effected their lives and well being more than they could have ever expected.

The idea of lusting over someone other than a spouse and concealing infidelities ultimately results in unbearable emotional pain that leads to death. When Florence spies on Edward taking Nancy out on a romantic date to the casino but end up under a tree in a dark night it becomes difficult for Florence to fathom that the man she has fallen in love with loves another woman. Because of the emotional heart break Florence was dealing with and the fear of facing Dowell about her promiscuous actions she decides to take extreme measures. Dowell says “I think it was stupid of Florence to commit suicide” (60). Florence falls into despair and her world becomes dark to the point she commits suicide and Dowell still finds about her affair with Edward after her death. This reminds me of the contour of my object. Everything around the woman in the image is black including the male besides her. This is relevant to Florence because she committed suicide when her whole world became dark and she felt the odds were against her. Just like the woman in the image who appears angry Florence was upset about her relationship with Edward. However, Edward was nonchalant about the way Florence felt about him because she was not the only woman he had eyes for. Aware of how much Edward loved Nancy, Leonora tells Nancy “you must stay here…to save Edward. He’s dying for love of you” (124). While Florence falls into misery over Edward, Edward on the other hand falls into misery over Leonora because she fails to reciprocate the love he has for her. Now shedding light on the male in my object he seems to be a representation of Edward who seems to portray the same emotions of sorrow and sadness. I could imagine Edward in the same state of despair as he is buried with all his problems in life just as the male in the image buries his face in his palms. Just like Florence who is a representation of the woman in the image whose world is dark the male in the image is an element of that darkness and resembles Edward. Because Edward can resemble the male in the object who is part of the darkness in the image we can infer that Edward is a dark character. Moreover, Ford notes “it appears that at Aden Nancy had seen in a local paper the news of Edward’s suicide” (126). Edward’s dark world drives him to end his misery all at once. The misery of not being able to be with Nancy makes Edward kill himself and Nancy finds out about in a newspaper. Just like Florence, Edward commits suicide when the emotional pain becomes unbearable over loving someone else he shouldn’t have given his love. This theme of darkness in the lives of Florence and Edward is symbolic of the darkness portrayed in the object involving the man and the woman who might have committed adultery. Thus the object proves the idea that living a double life of unfaithfulness leads to severe emotional and physical consequences.

Considering all that has been mentioned it is safe to say that many individuals struggled to conceal their infidelities while living a double life. Failure to maintain a life full of secrets and betrayal ends in deterioration. As we see in the illustration, it appears that the man and the woman are both in dark places because of their promiscuous actions that have led to it. The outcomes that both Florence and Edward decided to resort to which was death makes it very clear that their infidelities is what made their worlds dark.
Reference
Ford, F. Madox. The Good Soldier. Oxford University Press, 2012.
The Miriam and Ira D. Wallach Division of Art, Prints and Photographs: Print Collection, The
New York Public Library. (1934). Primeval Retrieved from
http://digitalcollections.nypl.org/items/42db8820-56bd-0130-33ab-58d385a7bbd0

Need help with the Commons? Visit our
help page Send us a message

Built with WordPress | Protected by Akismet | Powered by CUNY